The Salvation Army has become aware that comments made on an Australian radio station back in June 2012 have resurfaced and are being reported as being representative of the views of the organisation as a whole. This is incorrect, as we would like to explain.

The spokesperson was led into a discussion on Salvation Army Christian beliefs about sin where the interviewers introduced particular texts, including the Romans 1:18-32 passage and some Old Testament Leviticus passages. The interviewers said that The Salvation Army's doctrine book Salvation Story talked about these texts in relation to homosexuality. That is factually untrue. The book discussed was already out of print and superseded by another book, The Handbook of Doctrine by the time of this interview. The newer book also makes no comment on the matter of sexuality - it deals only with the foundational Christian beliefs such as the nature of God, the inspiration of the Bible, the person and work of Jesus Christ, etc.

A diverse range of views on homosexuality exist within The Salvation Army – as among the wider Christian (and non-Christian) community. But no matter where individual Salvationists stand on this matter, The Salvation Army does not permit discrimination on the basis of sexual identity in the delivery of its services or in its employment practices. Our international mission statement is very clear on this point when it says we will 'meet human needs in [Jesus'] name without discrimination'. Anyone who comes through our doors will be welcomed with love and service, based on their need and our capacity to provide.

The Salvation Army stands against homophobia, which victimises people and can reinforce feelings of alienation, loneliness and despair. We want to be an inclusive church community where members of the LGBTQ community find welcome and the encouragement to develop their relationship with God. 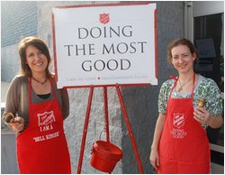 We have also been disappointed to notice Photoshopped images that portray Salvation Army fundraisers alongside anti-gay slogans. The alteration of these images maliciously misrepresents people who have freely given their time and energy to raise funds in order that The Salvation Army can provide vital assistance to millions of needy people every year – including many gay, lesbian and transgender people.

While we respect the use of humour and satire, in this instance we are disappointed that the image is presented without making clear that it has been altered.