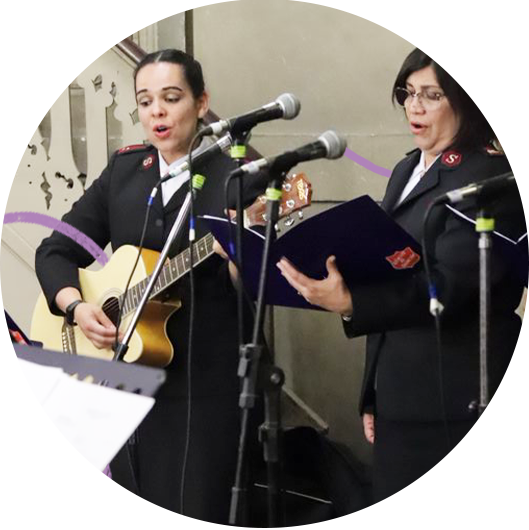 During their visit, Commissioner Peddle attended two women’s rallies – one in South America East and the other in South America West. For both territories, this was a long-awaited occasion! Their gatherings were the first large-scale event since Covid-19 and friends were excited to embrace each other and catch up on the years they had spent apart.

‘We had an incredible time with Salvationists in South America,’ shared Commissioner Rosalie. ‘The territorial women's rallies were outstanding! There was such a beautiful atmosphere in simply being in fellowship with one another. We came into the presence of God, hearing powerful testimony after powerful testimony and singing songs that were filled with the Holy Spirit.’

In the South America East Territory, those gathered at the women's rally looked ahead with hope and expectancy for what God will do in their lives and the lives of their young people. Centred around the theme, 'Women of courage and resilience: Empowering the next generation!’, people of all ages were invited to share in reflection and thanksgiving for what has been and gave space for praise, prayer and worship for what is to come. The engagement of girls and young women within the territory was evident in the planning and preparation of the event, proving that the thematic focus on empowering younger people was not simply lip service for those involved in Women’s Ministries.

The theme of the women’s rally in the South America West Territory was, 'Stir the fire God has placed within you!’ For Commissioner Rosalie, a highlight was the ‘powerful and moving’ presentation of several songs from Spirit!, a musical written by the late General John Larsson and the late General John Gowans. In each moment of the rally, through sung worship, spoken testimony and presentations of praise, the Holy Spirit was clearly stirring the hearts of those in the room. ‘The response to God's call to full surrender was overwhelming,’ Commissioner Rosalie recalls. ‘Women of all ages knelt praying for fresh strength. After experiencing this space for myself, I can only pray that the same Holy Spirit courage and renewed confidence in God’s mission is given to the whole world.’