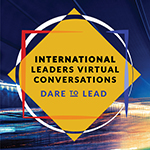 THE Salvation Army’s International Leaders Virtual Conversations (ILVC) – held entirely online over several months – have now concluded. Participating leaders from every Salvation Army territory and command say it has been a wonderful opportunity to speak together and to discuss matters of significance.

On 15 March, General Brian Peddle spoke with leaders in three different gatherings – to allow for time zones – to share final thoughts and consider the many responses received from the smaller group discussions. This has provided insightful and discerning affirmations and considerations which will now be further examined by The General’s Council (the group at International Headquarters that provides counsel to the General).

The international agenda focused on Leadership of the Army and the movement’s succession plan, along with consideration of Gender Equity. Leaders also discussed Human Sexuality, with a broad engagement around The Salvation Army’s service without discrimination. The General plans to comment further on the conference in a communication to all Salvationists in the near future.

All ILVC delegates gathered virtually to share in final worship and prayer forums on 8 April under the leadership of the General and the Chief of the Staff (Commissioner Lyndon Buckingham), supported by Commissioners Rosalie Peddle and Bronwyn Buckingham. This was a time of rich prayer in which the leaders from around the world expressed their heartfelt praise and thanksgiving to God for his faithfulness and earnestly sought his continued wisdom and guidance. It was a day enveloped in prayer and praise.

As leaders expressed their thanks for this opportunity, there was a spirit of unity and hope as, together, they moved forward in ministry and service.

The virtual conversations have concluded in terms of the leaders meeting together, but the affirmations and recommendations which have resulted now enter a new phase. The prayer support of Salvationists and friends around the world is requested for all international, territorial and command leaders as they consider the best way forward.