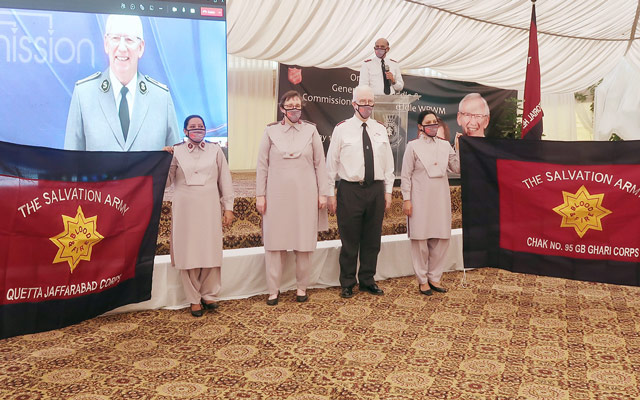 THEY may have been in London, UK, but for the weekend of 16-17 October 2021 the hearts of General Brian Peddle and Commissioner Rosalie Peddle (World President of Women’s Ministries) were almost 4,000 miles to the east, as they shared in a virtual visit with the Pakistan Territory. An in-person event took place in a 600-person marquee at the territorial headquarters (THQ) compound in Lahore, with large screens enabling everything to be seen clearly. Salvationists and friends from the rest of the territory followed the example of the international leaders and joined in on their computers, tablets or mobile phones.

Officers councils took place on Microsoft Teams, with only the officers from the closest two divisions attending in-person. The guests of honour were still afforded cultural welcomes despite the distance, with the international leaders draped with special shawls (and a hat for the General) that had been sent to London. The General launched the territory’s new Urdu song book and encouraged the officers to use it during worship and as a prayer book.

On Sunday, most of the territory took part in the morning meeting online, with an estimated ‘congregation’ of more than 20,000 viewers. In the afternoon, the whole territory was part of the meeting virtually, but officers from Lahore and Sheikhupura Divisions and representative local officers were present at THQ for the meetings. They were joined by denominational leaders including the Moderator of the Presbyterian Church and the General Secretary Designate of the Pakistan Bible Society.

Soldiers and officers from all over the territory participated by welcoming the international leaders through liturgical and ‘cultural’ dance, choirs, timbrels and Scripture readings and prayers. Testimonies included some by young people who shared experiences of a Brengle for Youth Leaders holiness teaching event that was held in Murree in July 2021. ‘Celebration of Territory’ videos were played during the offering, with short clips from each division showing the breadth of Salvation Army ministry in Pakistan.

In the day’s first session, the General reminded the congregation that Christians are called to be God’s holy people. He challenged everyone to step out in faith and confidence, acting as God’s force for good against injustice.

In the second session, the General announced that corps status had been awarded to The Salvation Army in Quetta Jaffarabad and Chak No. 95 GB Ghari. The corps plant at Quetta has reached the minimum number of 70 soldiers for corps status and Chak No. 95 GB Ghari has developed from a society to a corps with more than 90 soldiers. He thanked God for the faithfulness of soldiers and officers from the two centres, also acknowledged that planting in Quetta had commenced under the leadership of previous territorial leaders Commissioners Carol and Ivor Telfer. He thanked God for their vision.

Territorial Commander Colonel Geoff Webb then presented corps flags to both new corps on behalf of the General.

In her Bible message, Commissioner Rosalie challenged the congregation to say ‘yes’ to God as he sends his people back into their communities and villages.

Throughout both days the Holy Spirit was moving, and in each meeting the mercy seat was lined with people responding to the Spirit-inspired messages of the international leaders.