GENERAL André Cox and Commissioner Silvia Cox (World President of Women's Ministries) attended an invitation-only event on Monday evening at the British High Commission in Singapore in recognition of The Salvation Army's work in the region and the 2014 International Conference of Leaders (ICL) being held there. The event was hosted by the Deputy British High Commissioner, Judith Slater. Attendees included Colonels Lyndon and Bronwyn Buckingham (leaders of the Singapore, Malaysia and Myanmar Territory) as well as members of the Singapore advisory board and representatives from the business and technology sector. 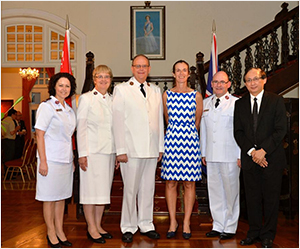 The next morning – the second full day of the conference – saw members of the International Doctrine Council (Commissioner Robert Street, Chair) and International Moral and Social Issues Council (Colonel Geanette Seymour, Chair) welcomed and invited into the discussion as delegates moved into conversation and reflection regarding lifestyle issues. The members of the councils were integral to the conversations and it was obvious that their presence, participation and counsel were welcomed as the leaders worked through the realities of the issues before them.

In Tuesday's plenary session, Conference Coordinator Commissioner William Cochrane (International Secretary to the Chief of the Staff) told delegates: 'We gather today to discuss some of the most complex issues facing the whole Church. We want this to be a theological reflection coming from our hearts and minds, and we invite Christ and the Holy Spirit to be at the centre of our discussions.' The commissioner also acknowledged that, while it would not be an easy discussion, 'the pressures of life and the pastoral realities we face require us to dialogue on these important issues'. 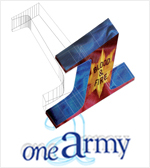 Helping Salvationists to have a better shared understanding of faith in the 21st century is the aim behind the new One Army Teaching Resource (sar.my/onearmy), produced by International Headquarters (IHQ). Commissioner Robert Street, who has been given the task of devising and producing the materials, spoke to the 2014 ICL delegates on Tuesday afternoon about the new teaching tools, encouraging them to 'engage with the material and promote its use' across the Army world. The roll-out of the new material is perfectly timed to address the reality of the topics being considered this week and the challenges that corps (church) leaders are facing today.

At the end of the day Commissioner Cochrane again thanked the delegates for their participation and engagement, and closed the final session in prayer. He asked for continued understanding and prayerful consideration of the important responsibilities entrusted to them. The conversation continues on Wednesday.