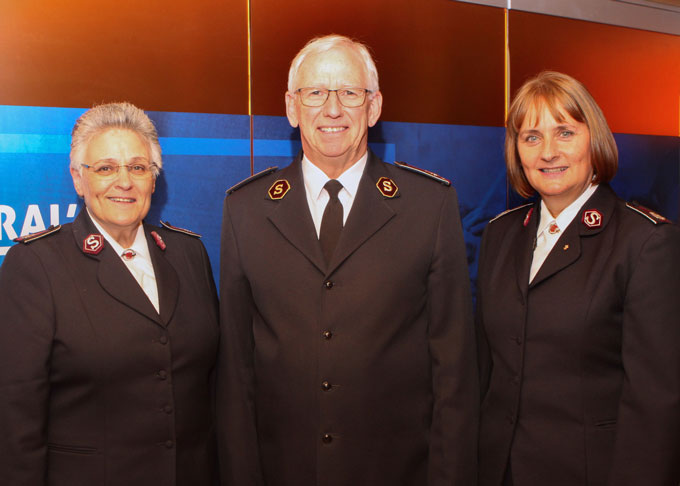 GENERAL Brian Peddle has paid tribute to Commissioner Betty Matear as she steps down from the role of Secretary for International Ecumenical Relations. He described the commissioner as a ‘master ecumenical person’ and said that she has taken The Salvation Army to places where it has not been accepted before.

Since Commissioner Betty was appointed in 2016, she arranged private audiences for the General with His Holiness Pope Francis and the Archbishop of Canterbury, the Most Revd Justin Welby. Excellent working relationships have also been built with other Christian denominations, including with the Lutheran World Federation, World Methodist Council, Roman Catholic Church and Seventh-Day Adventists.

The General revealed that the emphasis on closer ecumenical relationships came directly from him, and that he sees the role of Secretary for International Ecumenical Relations as vitally important so that The Salvation Army can learn from other branches of the Christian Church and increase its own influence. ‘We can,’ he said, ‘recognise differences of theology but unity of faith.’

‘Commissioner Betty – not the General – has been the face of The Salvation Army.’ General Brian Peddle

This international example of relationship-building will, hopes the General, inspire Salvation Army territories worldwide to form closer links with their brothers and sisters in Christ. He added: ‘The commissioner represents the Office of the General, providing opportunities to discuss world concerns – such as the environment – and for The Salvation Army to share our best practice and learn from other organisations’ best practice.’

Commissioner Betty reflected on her five years of working in the ecumenical community, saying: ‘It’s been a huge privilege.’ She recalled times of ‘rich fellowship’ and opportunities to share the work of The Salvation Army. She was enthusiastic too about the ministry of International Headquarters, from the contacts and overview of the international zones and Programme Resources to content such as videos, news releases and All the World magazine that have helped her to share stories and ministry in a relevant way.

She added that anyone thinking that ecumenism is all about top leadership needs to think again: ‘We need to show the world that the Church is one. God’s will for his people is that we work together. It happens in times of disaster, for instance, when local churches help Salvation Army emergency responses, but that doesn’t tend to be given the name “ecumenism”, even though it is!’

Commissioner Betty’s successor is Commissioner Jane Paone, who comes into the role with experience of leadership in the United Kingdom and Ireland Territory, Italy and Greece Command, France and Belgium Territory and Switzerland, Austria and Hungary Territory. She was also The Salvation Army’s representative to the United Nations bodies that are based in Europe.

The General is certain that Commissioner Jane will maintain and build on the relationships that have been nurtured by Commissioner Betty.

‘To many members of the ecumenical community,’ he concluded, ‘Commissioner Betty – not the General – has been the face of The Salvation Army. And,’ he added, ‘that’s the way it should be.’