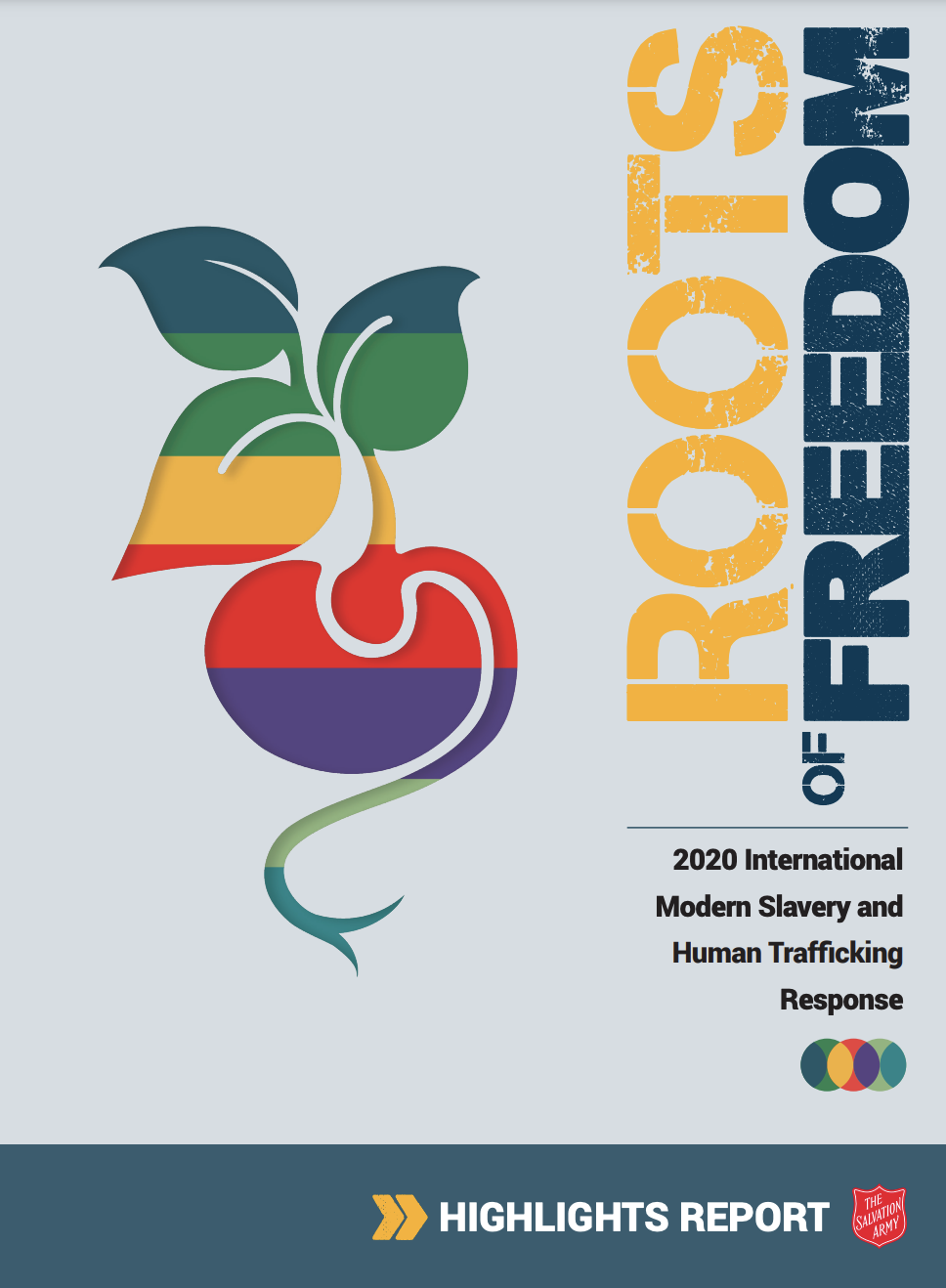 THE Salvation Army’s International Social Justice Commission (ISJC) in New York City, USA, is pleased to unveil a landmark report on the worldwide movement’s response to modern slavery and human trafficking. Roots of Freedom outlines some of the progress around the four objectives from the Fight for Freedom international strategy made in 2020 – a year described as one of ‘laying down roots and foundations to support and make allowance for localised and contextualised responses to bloom and grow’.

The 52-page report begins with an introductory letter from Priscilla Santos, who took on her role as the first International Coordinator for The Salvation Army’s Modern Slavery and Human Trafficking Response in May 2020. Citing ‘terrifying statistics’ which indicate there are more than 40 million men, women and children internationally who are impacted by slavery and trafficking, Priscilla notes that The Salvation Army ‘has a unique role in responding to this growing phenomenon’. Acknowledging the ‘agility, grit and resiliency’ of those working to support survivors throughout a very challenging year, Santos also observes that ‘no one is more resilient than the survivors of trafficking [whom] we serve’.

The Roots of Freedom report notes the effects of the COVID-19 pandemic, which has ‘exacerbated the vulnerabilities’ of those susceptible to exploitation. It identifies ways in which The Salvation Army has shifted and adapted its work to help counter traffickers who would take advantage of people with reduced income or who have lost their livelihoods. A key element of this has been cultivating a partnership with the International Anti-Human Trafficking Network and Joint Learning Initiative on Faith and Local Communities. The Salvation Army, along with other organisations, has conducted detailed research leading to an informed and survivor-centred approach in responses around the world.

The report provides an update on the goal to build a sustainable response to modern slavery and human trafficking in each of the 132 countries that have an official Salvation Army presence. Progress includes zonal coordinators for modern slavery and human trafficking response overseeing activity in their specific geographical areas, and success in appointing 86 territorial/national contact persons across territories, countries and commands.

Building on this deployment of human resources around the world, the report also reflects aspects of education and resourcing, as The Salvation Army seeks to ensure that all personnel are aware of and recognise signs of potential slavery or trafficking. This includes the publication of Fight for Freedom – a guidebook that has been translated into Spanish and Korean so far – and a global toolbox informed by practitioners around the world, which provides practice principles on a local, national and international level.

Thirty-nine territorial modern slavery and human trafficking response action plans have been developed, providing tangible capacity to address slavery and trafficking as presented in each national context. In Sri Lanka, for example, a dedicated team of 14 people has been established in order to raise awareness in communities across the island, in Salvation Army corps (churches), centres and through outreach to rural areas.

Roots of Freedom provides readers with highlights of actions undertaken through the year to address each of eight focus areas: Prayer, Prevention, Participation, Protection, Partnership, Prosecution, Policy and Proof.

In answers to prayer, the report gives examples such as an opportunity to address politicians at a national prayer breakfast in the Finland national parliament. A unique event occurred in Bangladesh, where 30 women from brothels around Dhaka were able to participate in The Salvation Army’s Annual Day of Prayer for Victims of Human Trafficking, providing a real authenticity and credibility to the event.

Meanwhile, in the area of prevention, Roots of Freedom spotlights work in 60 neighbourhoods across eastern Kenya that builds on relationships already established with groups such as schools and community groups. The programmes have helped to identify social injustices such as poverty, unemployment and tribal conflict, and explored solutions through economic empowerment training, guidance and providing resources in collaboration with the communities themselves and the local government. In Singapore, Malaysia and Myanmar, vocational training – such as sewing, welding, and repairing of motorbikes and mobile phones – has been offered, equipping young people with transferable skills and helping them make a living wage.

Roots of Freedom looks forward as well, with plans to strengthen systems and grow leaders, educate and resource, mobilise with holistic responses, and to expand the global network.

The Salvation Army has also identified prioritising growing survivor engagement and inclusion within the organisation as a strategy for change. To advance this effort, Malaika Oringo has been appointed as Survivor Chair of the International Modern Slavery and Human Trafficking Response Council.

Priscilla Santos concludes: ‘We can no longer speak about working towards freedom for others without people with lived experience leading alongside. We look forward to welcoming survivor leaders to more spaces of influence within The Salvation Army.’

The report can be downloaded from the ISJC website at sar.my/rootsoffreedom.