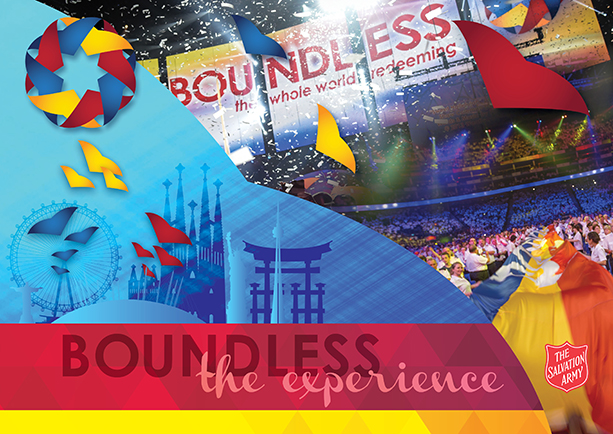 ONLY 10 weeks after Boundless – The Whole World Redeeming, The Salvation Army's 150th anniversary international congress in London, drew to a close with thousands of Salvationists marching along The Mall to Buckingham Palace, a photographic record of the five-day event has been published by the International Headquarters book imprint, Salvation Books. Boundless – The Experience uses 320 vibrant images taken by photographers from the Boundless Media Team to tell the story of an event that brought together the international Salvation Army like never before.

The 164-page coffee table book shows events from 1-5 July 2015, including scenes of worship, drama and music performances from The O2's huge arena and other venues, as well as capturing the sense of excitement and togetherness as Salvationists and friends took over the iconic London venue for one unforgettable week. The book opens with a message from General André Cox and a synopsis of the congress events.

In his foreword, the General writes about the impact that the online coverage of the congress had on people in more than 150 countries around the world, adding that Boundless – The Experience is 'for those who were at The O2 and on The Mall in person, but equally it is for those who were there virtually – but very much in spirit'.

Boundless – The Experience is available from territorial trade departments across the world. Please contact your territorial/command/region headquarters for contact details. The book is also available to buy for personal callers to International Headquarters for £10, and will be on sale during the Open House London event on Saturday 19 September.