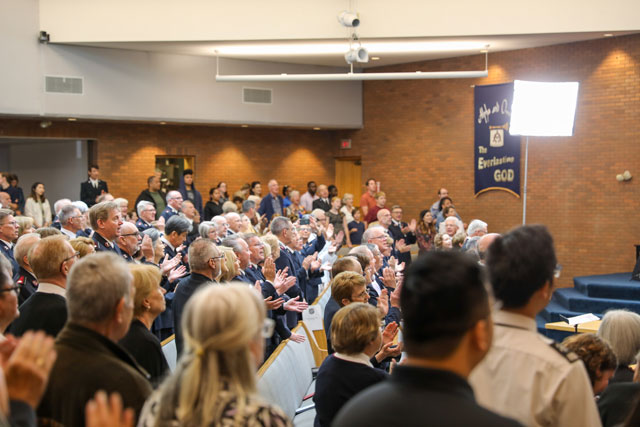 Welcomed to Cariboo Hill Temple Corps (church), Vancouver by Commissioner Floyd Tidd, Territorial Commander (TC) of the Canada and Bermuda Territory, international leaders gathered with Canadian Salvationists in worship. The service began with a Land Acknowledgement – a statement recognising the traditional territory of the Indigenous people(s) who first called the land home before the arrival of settlers. Delivered by Verna Benson, she spoke first in her native tongue and followed this with a sung prayer of blessing for the international leaders.

Recognising those unable to attend in person, Commissioner Lyndon Buckingham, Chief of the Staff at International Headquarters, welcomed the General and global zonal leaders before inviting Commissioner Rosalie Peddle, World President of Women’s Ministries, to open the call to worship by reading Psalm 100. She said, ‘What a delight for us all to be here in Vancouver, Canada! I call you all to worship this morning. I believe that God is here and that he will speak into our hearts and minds.’

Magnificent music was provided by Cariboo Hill Temple Songsters and Band during the service before Commissioner Bronwyn Buckingham, World Secretary for Spiritual Life Development, led the congregation in prayer for the victims of human trafficking. Commissioner Man Hee Chang, TC Korea Territory, then offered prayers for the international Salvation Army, saying, ‘We all serve the same Saviour. May our worship be a fragrant offering to you this day.’

Testimonies of a limitless God

Colonel Patti Niemand, Territorial President of Women’s Ministries in the Papua New Guinea and Solomon Islands Territory led the congregation in prayer saying, ‘Gracious Lord, thank you for bringing us together today. We thank you that as we gather for worship today, we can celebrate an international Salvation Army with people from different parts of the world and all serving the same Lord. Thank you that we celebrate unity in diversity.’

Commissioner Lisbeth Andersen, Territorial President of Women’s Ministries in the Switzerland, Austria and Hungary Territory, shared her testimony, explaining that she sometimes felt overwhelmed. She said, ‘God gave me a Bible verse to hold on to, and I have written it out for myself. I just pray the words of Psalm 61: “Hear my cry, O God; listen to my prayer…” and I know the rock is Jesus.’

Commissioner Yusak Tampai, TC Indonesia Territory, gave a visual testimony and described the growth of his territory’s corps, expressing delight at the numbers of young Salvationists worshipping there. He said, ‘We want to praise the Lord for his limitless love which is in our hearts. Hallelujah!’

Message from the General

General Brian Peddle, the spiritual leader of The Salvation Army, gave a Scripture reading from Ephesians 3:14. Speaking more broadly, he thanked the musicians for their beautiful ministry and opened his sermon by saying, ‘I have chosen to speak with you about the theme for our conference which is “Limitless God”. I pray that out of his glorious riches he may strengthen us with power through the Holy Spirit so that Christ may dwell in our hearts.’

The General recognised the 58 territories and commands and 133 countries represented at the conference and challenged the congregation to test his conviction that God was blessing The Salvation Army around the world. He said, ‘God is moving, and transforming, and continues to offer abundant life to all who would receive it from him. I believe that God is going to bless and honour our faithfulness. His incredible bounty is shared with his people. - Limitless God – a God with a capacity that never exhausts itself. Everything else is finite.’

Sharing stories about the growth of several Salvation Army corps around the world, the General underscored that The Salvation Army today is larger than at any other time in history. He said, ‘Do not lay down your sword just yet! As our prayers are answered, we must be able to pray “Thy Kingdom come and we will become the Kingdom of God here and occupy the otherwise secular spaces of the world. Do not frustrate the will of God. Instead, be his instrument and ambassador.’

A number of people kneeled at the mercy seat in response to the General’s message.

Following the reflection song, ‘I love you, Lord,’ a closing prayer and the final song, ‘Come on and celebrate,’ which had the congregation singing and clapping in the aisles, Commissioner Lyndon Buckingham closed the service with the benediction, urging people to make a difference. He said, ‘Be the salt and light. Give testimony and be the men and women of God all around the world.’

The service concluded with the band playing a gentle rendition of ‘How great thou art’ as the congregation filed out in fellowship to enjoy refreshments and the company of each other on this sunny day in Vancouver. Amen.

Sunday ended for the international leaders with a profoundly spiritual Concert of Prayer presided over by Commissioner Bronwyn Buckingham.