COMMENCING a tour which will see the international leaders visit three African nations throughout the month of August, General Brian Peddle and Commissioner Rosalie Peddle (World President of Women’s Ministries) arrived in the Malawi Territory on Monday 8 August. They were welcomed by territorial leadership, Colonels Samuel and Theresa Baah, who were accompanied by many soldiers wishing to greet the international leaders upon their arrival. 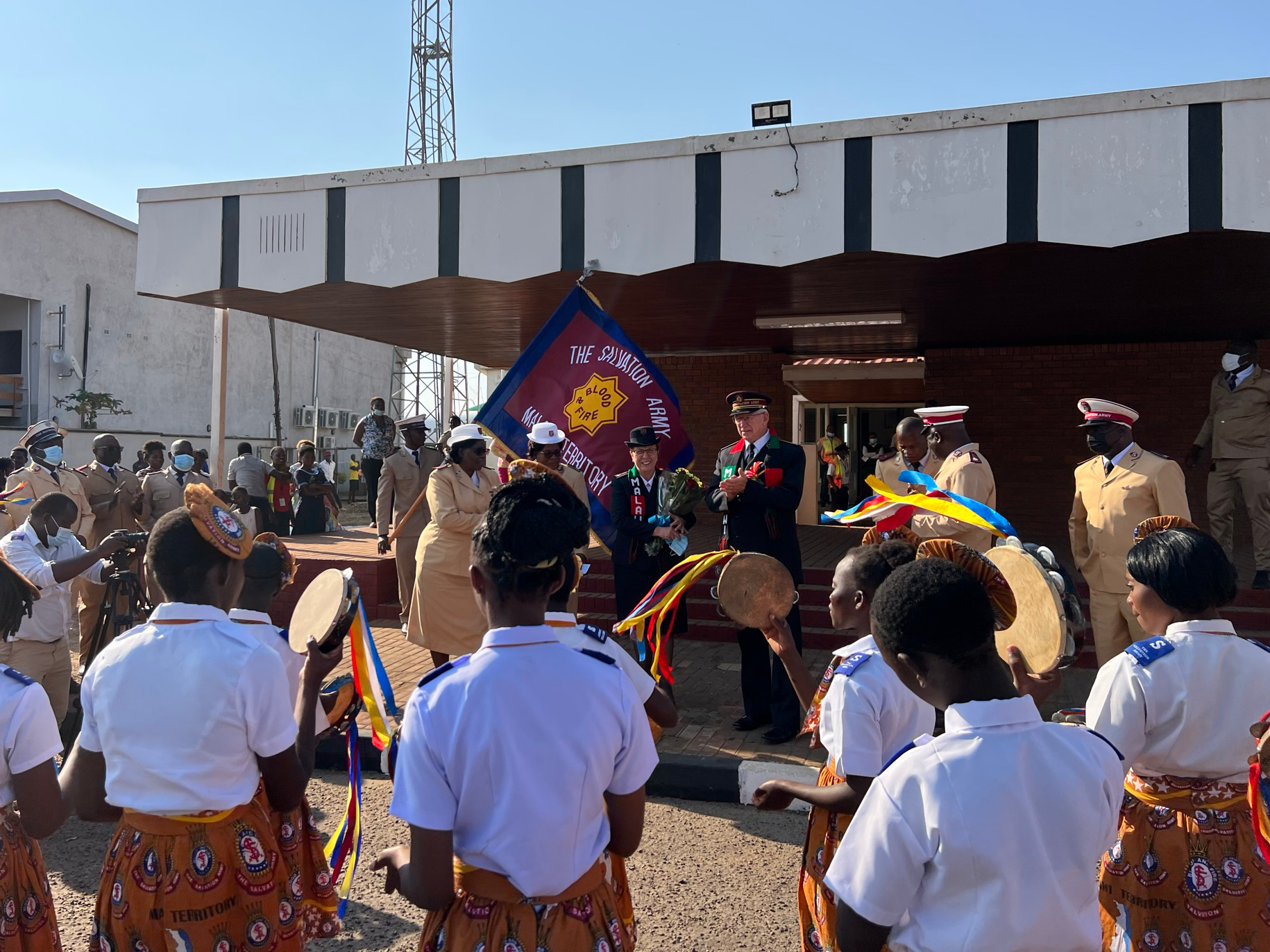 During their visit, the General and Commissioner Rosalie visited many sites that hold meaning and significance to the territory: the territorial headquarters, the officer training college, and the Bangwe school and health centre which has recently registered 100 newborn babies. While on-site at the Bangwe school, the international leaders officially opened a locally funded canteen and, emphasising the importance of quality education, the General urged the young people to rely on God as they grow and learn at Bangwe.

Blantyre City Mayor, Wild Ndipo, extended a warm welcome to the General and Commissioner Rosalie and expressed appreciation for the good work The Salvation Army is doing in Malawi. Mayor Ndipo granted the international leaders the Freedom of the City as a recognition of exceptional service. Receiving this honour on behalf of The Salvation Army in Malawi, the General took the opportunity to pray with Mayor Ndipo for the people of Blantyre.

The General and the World President of Women’s Ministries provided updates about growth and missional strategy to officers attending the officers’ councils. Following these sessions, further opportunity for Salvationists to join with the international leaders took place at a soldiers rally and festival of praise where the General conducted the installation of the Territorial Commander and Territorial President of Women’s Ministries, Colonels Baah, and led the commissioning of several timbrellists, songsters, bandsmen and young singers. These groups were commissioned as territorial brigades. An additional highlight was the presentation of long service badges to the Chief Secretary, Lieut-Colonel Onai Jera, and Territorial Secretary for Women’s Ministries, Lieut-Colonel Deliwe Jera, following 30 years of dedicated ministry as Salvation Army officers. 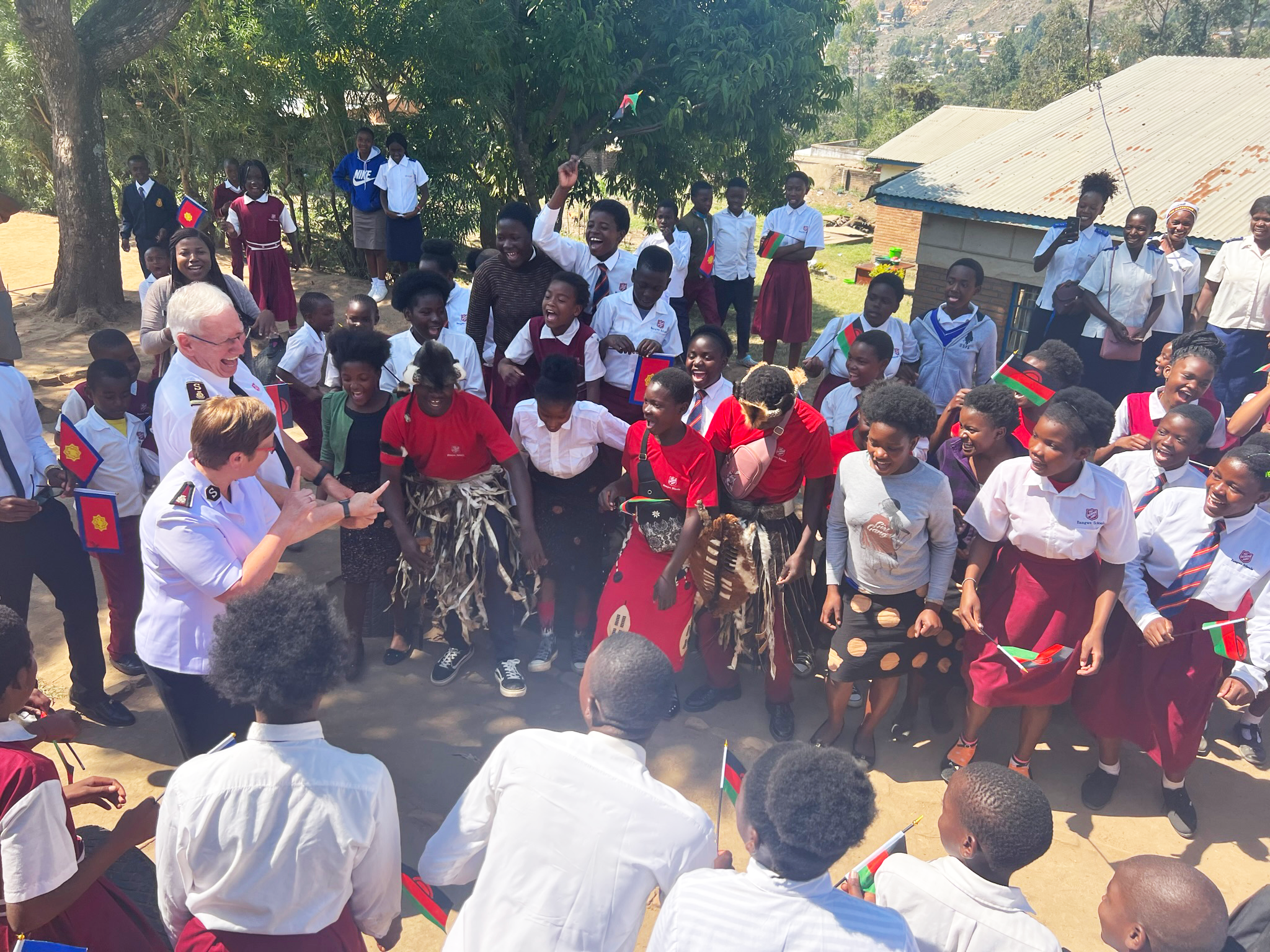 A congress, under the theme ‘Mobilised to do a new thing for God’s glory’, saw the General and Commissioner Rosalie attend various rallies – men’s fellowship, women’s fellowship and youth – with strong and enthused congregations in attendance. At each of the rallies, there were various activities and presentations of music and dance. In particular, the Hosho Dzedu Brigade from the Zimbabwe Territory supported proceedings with their celebratory musical offering throughout the congress weekend.

In the concluding meeting on Sunday, 67 senior soldiers and 30 junior soldiers were enrolled by the General. It was at this service that the international leaders were excited to present copies of Called to be a Soldier and Day by Day, in English and in Chewa translation. As those gathered received a final message, many Salvationists responded to the General’s word of affirmation and challenge, ‘God has his hand upon The Salvation Army and all across the world God is using his people. So, I want to remind Malawi today that you are part of that Salvation Army. You can know God’s hand and blessing upon your life because God does not leave you or forsake you. My call to The Salvation Army in Malawi – and it must be a clear call – is that we need to be God’s people today. The only way that we can be God’s people is to follow Jesus Christ, accepting the call to be his holy people just as he is holy.’

Reflecting on their time of worship and celebration with the people of Malawi, the General wrote in a recent Facebook post of his and Commissioner Rosalie’s experience, ‘We applaud their giftedness, their enthusiasm and their passion. God bless them. We leave Malawi with some of the “warm heart” of Africa still with us.’

Report by IHQ Communications, based on a report from the Malawi Territory
Photos are avaiable to view: https://sar.my/malawi-2022