A joyful welcome in Liberia for international leaders 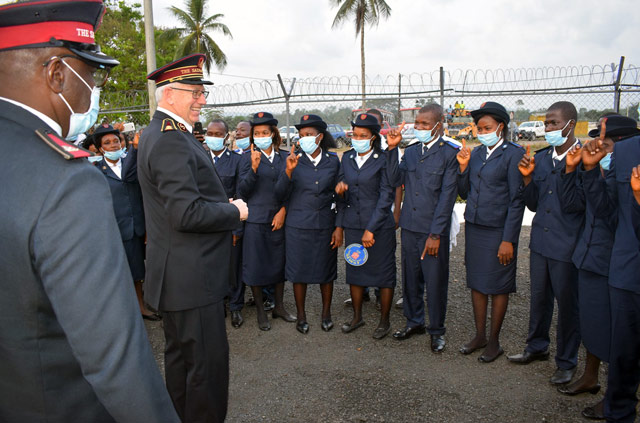 ON Wednesday 16 February 2022, General Brian Peddle and Commissioner Rosalie Peddle (World President of Women’s Ministries) arrived in Liberia to a warm and colourful welcome from a congregation of more than 300 Salvationists, students and teachers. The Rev M. Emmanuel Nimely, Religious Advisor in the Office of the President of the Republic of Liberia welcomed the General and other guests to Liberia on behalf of the Government.

The visit continued to the Liberia and Sierra Leone Command Headquarters and officers training college where the world leaders had a briefing session with the command leadership and enjoyed a guided tour of various departments. They were joyfully received by the Reflectors of Holiness Session of 19 cadets and the college staff and were honoured to meet the first three cadets in training from the West African nation.

The General and Commissioner Rosalie subsequently visited the capital building and office of the Vice President of the Republic of Liberia, Her Excellency Chief Dr Jewel Howard-Taylor for a meeting with the government. Warmly welcomed, they discussed the work of The Salvation Army in Liberia, notably the contributions towards the education of young people. The meeting concluded with prayer offered by the General for the Vice President, the government and the nation of Liberia.

The General and Commissioner Rosalie then travelled to Paynesville for an indoor programme with the command Salvationists and social institutions. Starting with a traditional Liberian welcome from the students at Len Millar High School, Sinkor, Monrovia, the world leaders then visited William Booth Clinic, situated among the slum communities of the red-light district in Paynesville. Here they were received by a jubilant crowd of students and teachers. 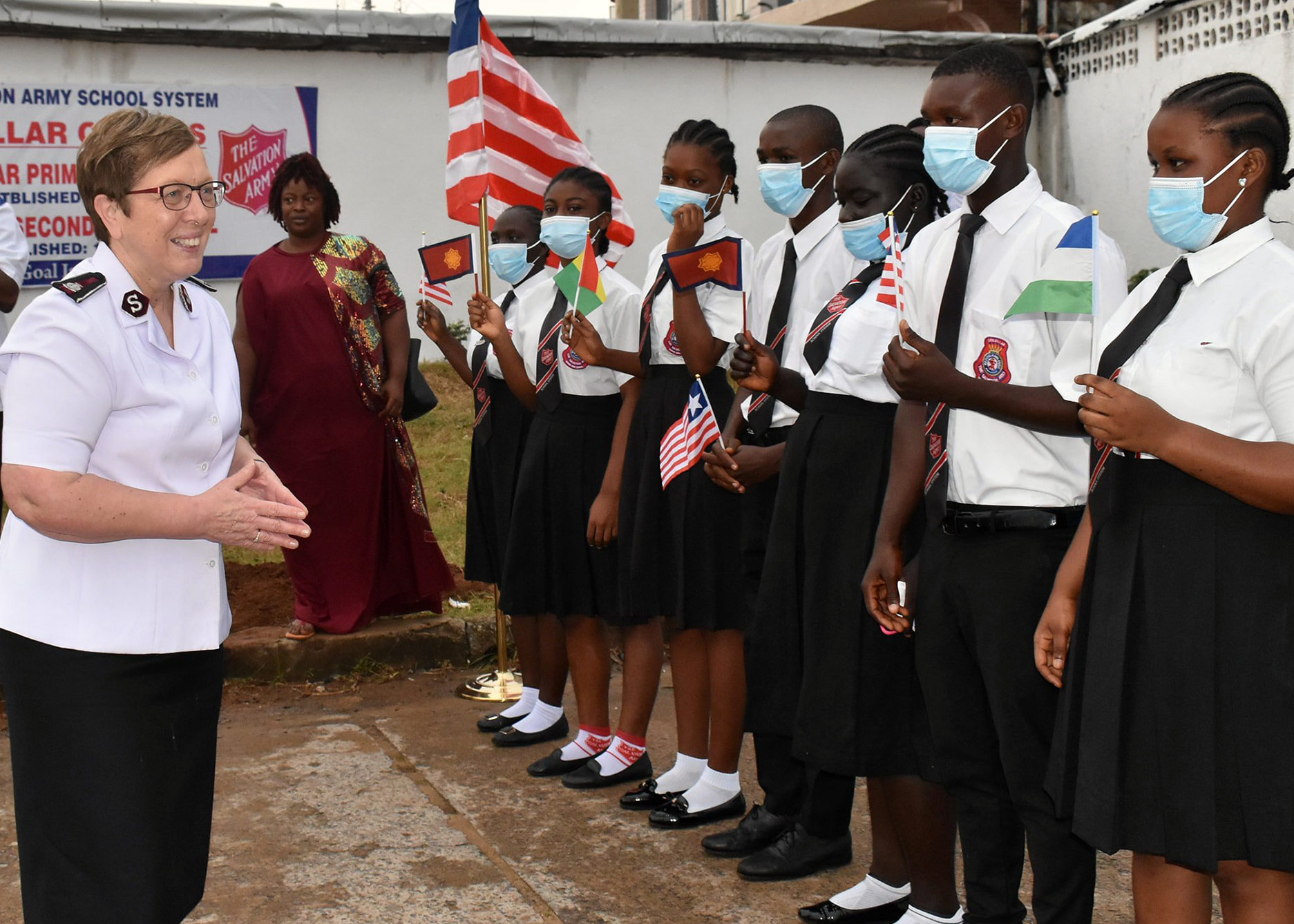 Seeing the work of The Salvation Army in Liberia

The international leaders were then taken on a tour of the William Booth Clinic before being ushered into an indoor programme attended by some 300 students and teachers from the Salvation Army polytechnic and other schools. Representative speakers delivered statements of appreciation on behalf of the students, teachers, and administrators.

Officers councils and welcome meetings were held at the rooftop hall of command headquarters, with 87 active and six retired officers in attendance. During councils the General delivered a message based on Isaiah 41:10, encouraging the officers to be ready, engaged and to take responsibility for their call to ministry. Thirty officers rededicated their lives at the altar in response to God’s call to ministry in The Salvation Army. Following a reading by the General from Deuteronomy 10:12-13, a further 26 people moved forward to the mercy seats in an act of dedication.

Saturday was reserved for rallies at the Ministerial Complex of Liberia, with the men’s and women’s meetings being held simultaneously in separate halls. The afternoon youth rally was followed by a traditional festival of praise in the evening which featured performances from a variety of groups. Almost 2,000 Salvationists attended the three events.

Celebrations concluded on Sunday with a march of witnesses and holiness meeting. The day started with hundreds of Salvationists and students parading through the streets of Monrovia led by the command brass band. The united holiness meeting was a great success with more than 2,500 people in attendance, and was made even more memorable by the presence of the world leaders and Her Excellency Chief Dr Jewel Howard-Taylor, who thanked The Salvation Army for contributing to the education of the young people of Liberia, providing health services in the country, and for helping to deepen the spiritual growth of the people. On behalf of the President of Liberia, she committed the government’s support to the programmes of The Salvation Army. The General thanked and blessed the command for a wonderful weekend of celebrating the goodness of God. He spoke from Psalm 51 and encouraged Salvationists to always seek the face of God, humble themselves, pray, and wait upon the Lord for his answer, adding, ‘As we journey through life, we add to our knowledge the experiences being shaped by God, and like our young people here in Liberia, by God’s grace, we can change the world.’ One hundred-and-fifteen people answered the General’s altar call and 17 junior soldiers, and 147 senior soldiers were enrolled by the General and Commissioner Rosalie Peddle.

Report from IHQ Communications, based on material from David S. Massaquoi, Sr.