'All the World' celebrates Boundless anniversary 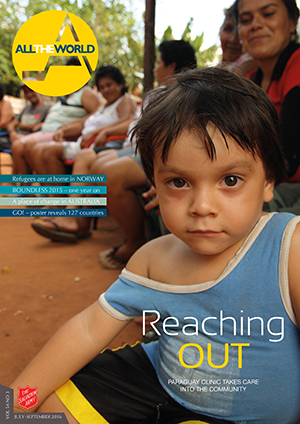 THE passing of a whole year since The Salvation Army's 150th anniversary international congress, Boundless – The Whole World Redeeming, is being marked by All the World magazine. The July–September 2016 issue of the international publication – out now – includes memories and reflections from congress coordinators Lieut-Colonels Eddie and Kathy Hobgood. Their thoughts, which feature in the print edition, are joined online at sar.my/boundlessmemories by exclusive content from members of the 'Boundless 8' – the group of interns who worked for free in the congress office for a whole year.

The congress – known to most people simply as Boundless or Boundless 2015 – gathered together 16,000 Salvationists from around the world, including representatives from every one of the 126 countries in which it was then at work (Slovakia brought the number up to 127 two months later). These thousands of people were joined by thousands more who watched the live-streaming of the main sessions or followed and shared through social media. With an estimated social media reach of 16.8 million, Boundless 2015 had a worldwide impact greater than any previous Salvation Army event.

To mark the first anniversary of the congress, which ran from 1 to 5 July, delegates – along with Salvationists and friends who followed the event online – are encouraged to share their own highlights and the lasting effects of Boundless at sar.my/boundlessmemories or via the International Headquarters Facebook page and Twitter feed.

The new issue of All the World also includes features on The Salvation Army's refugee response in Norway, community health ministry in Paraguay, the power of social media, a place of transformation in Australia and much more! A back page poster (downloadable to print and share) traces The Salvation Army's growth from its birth in the United Kingdom in 1865 through to today, with the flag flying in 127 countries.