The General and Commissioner Peddle ‘Wow’ Them in Washington 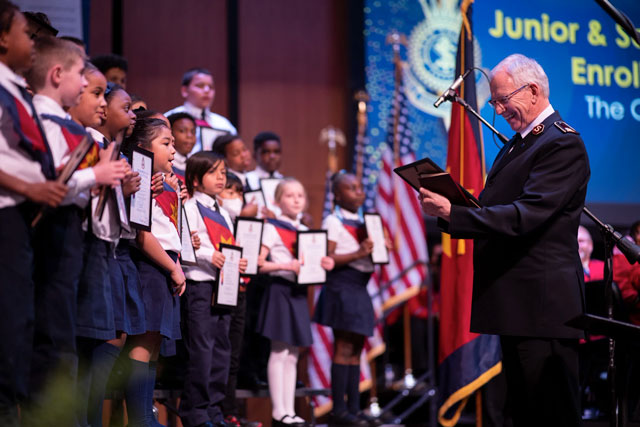 Following lightning-fast meetings in Atlanta, Georgia, and Chattanooga, Tennessee (USA Southern Territory), General Brian Peddle and Commissioner Rosalie Peddle (World President of Women’s Ministries) jetted to the Potomac Division, in Washington, D.C. Supported by territorial leaders Commissioners Barbara and Willis Howell, members of the USA Southern Territory and accompanied by divisional leaders Lieut-Colonels Allan and Fiona Hofer, the leaders visited the Landmark (Korean) Corps and the Fairfax Corps in Virginia. The internationalism of the two corps was evident as parts of the meeting were in Korean, Spanish, Gujarati and English.

After musical numbers by the Landmark Songsters and Praise Band, Commissioner Peddle brought the morning message. ‘With the Holy Spirit helping us, God sends us into our neighbourhoods, our workplaces, our schools and our families to live as holy people in an unholy world.’ Speaking of the first disciples, she asked, ‘Why were they so different? Why are we so different? Because we have been with Jesus. We can’t get enough of him. And as we draw closer to him, people will know we have been with Jesus.’ As the commissioner closed her address, there was an immediate response as the altar was lined again and again with those who wanted to stand more boldly for Christ.

Hundreds of Salvationists crowded into Schlesinger Hall for an area-wide soldiers rally later that afternoon. The theme ‘Battle Ready on Our Knees’ was accentuated by musical groups and testimonies. The most impressive sight was 39 uniformed young people who were enrolled as junior soldiers by the General. Fifty-one fully uniformed and diverse recruits then marched on the stage to be enrolled as senior soldiers.

Clearly moved by the enrolments and the afternoon events, the General said, ‘The blessing of this day will carry me back to London.’ Challenging those present he asked, ‘If we were truly battle-ready, what could God do with the 1.3 million senior soldiers we have around the world? We need men, women and young people to hear the whisper of God’s voice and then respond, “Here am I. Send me!”. Some will go to the training college. Some will serve as soldiers right where they are. But all of us must proclaim, “Send me to the people!”. God is calling you to the heart of the gospel – not fluttering around the edges.’

The prayers of many were answered as the mercy seat was crowded several rows deep. The USA Southern Territory, and the Potomac Division in particular, declares that it is ‘battle ready’ for the mission that lay ahead.