‘WELCOME home!’ was a common refrain from the moment General Brian Peddle and Commissioner Rosalie Peddle (World President of Women’s Ministries) arrived in the Newfoundland and Labrador Division of the Canada and Bermuda Territory. The General and the commissioner both grew up on Newfoundland, but this was their first official visit as international leaders of The Salvation Army. 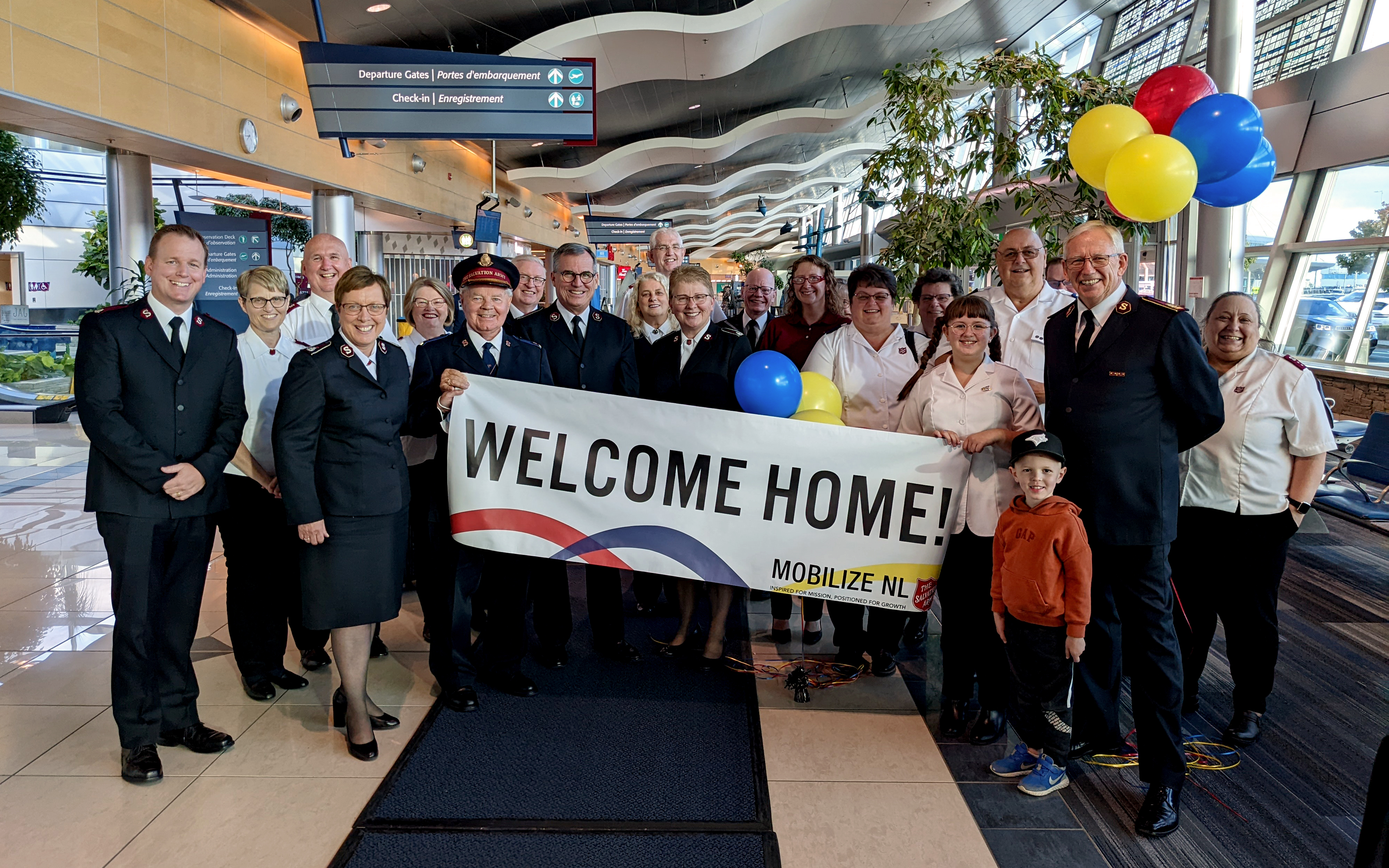 At the new Ches Penney Centre of Hope in St John’s, the General was clearly moved by the supportive housing programme, which provides 20 permanent, affordable apartments for homeless people. Joining Mayor Danny Breen and the Hon John Abbott, provincial minister of children, seniors and social development, for lunch, the General said: ‘I want to express deep gratitude to the government for its generous support and funding.’

Introducing the international leaders to the first public meeting of the visit in Gander, the theme of the visit – Mobilize NL – was highlighted by Territorial Commander Commissioner Floyd Tidd who said that the weekend’s events signalled an opportunity to ‘mobilise again’ following the COVID-19 pandemic.

Commissioner Peddle delighted the congregation with stories from one of her first appointments, in Deadman’s Bay, around 60 miles north-east of Gander. ‘They were two absolutely wonderful years of growing and maturing,’ she said. ‘I’m thankful to God for his hand on my life through the years.’

A highlight of the meeting was a report from Lieutenant April Ward of Buchans Corps (church), who shared how territorial innovation grants have sparked new ministries with both young people and seniors. ‘We have parents who are asking about Church …’ she said, ‘with a more inclusive feeling that no matter what circumstance they find themselves in, they could now come to us to help.’ She added: ‘We look forward to what God has in store – there is so much happening and so much more to come.’

Throughout the weekend, the General delivered messages centred on surrendering to God. He said: ‘Our Founder William Booth said: “God shall have all of me,” and, because of that, we have The Salvation Army.’ He added the challenging question: ‘What does God want to do with you?’

The second meeting took place in Blaketown, which the General affectionately referred to as his ‘backyard’, having grown up in Norman’s Cove, only a short distance away. The international leaders were led into the service by Commissioner Peddle’s brother, Wes Rowe, carrying the flag of her home corps – Carbonear, Newfoundland.

Thunderous clapping and joyful singing filled the gym of Crescent Collegiate as the worship team led the congregation in an array of familiar choruses and hymns.

In his Bible message, the General spoke from the heart, sharing how he became saved at nearby Chance Cove Corps in Easter 1974 and felt called to Salvation Army officership. ‘Surrender is the key to a relationship with the Almighty,’ he said. As the worship team played ‘All to Jesus I Surrender’, seekers moved forward to rededicate themselves to Christ.

‘We have a lot to praise God for!’ declared Major Chad Ingram, divisional children and youth secretary.

In her Bible message, the commissioner encouraged Salvationists to stand firm and fight courageously. ‘Through the work and power of the Holy Spirit, God is on the move!’ She asked: ‘What would we be without our young people? They are the Army of today and tomorrow.’

The Sunday morning meeting began with a moment of silence to mark the 21st anniversary of the 9/11 terror attacks on the USA. Images of The Salvation Army’s response to the tragic events were displayed, showing the work in New York as well as the caring ministry to stranded passengers that took place in Gander, Newfoundland.

In his final message of the weekend, the General assured those gathered and watching by livestream that ‘God has a plan for The Salvation Army in Newfoundland and Labrador’. Calling Salvationists to give themselves in service to God, he asked: ‘Can God count on you? Surrender your all – the Kingdom is at stake!’

Stirred into action by his message, many people moved forward to pray.

Photos from the visit are available on the IHQ Flickr stream at sar.my/general-newfoundland