HEAVY rain and flooding caused damage to the main water treatment facility in Jackson, Mississippi, on 29 August, leaving more than 180,000 residents without clean drinking water. The Salvation Army’s response was immediate and critical to the welfare of the community.

While the city was still putting together plans for a large-scale water distribution programme, The Salvation Army’s USA Southern Territory stepped in and, working in coordination with the Mississippi Emergency Management Agency (MEMA), arranged its own distribution plan with support from Walmart, a national partner. 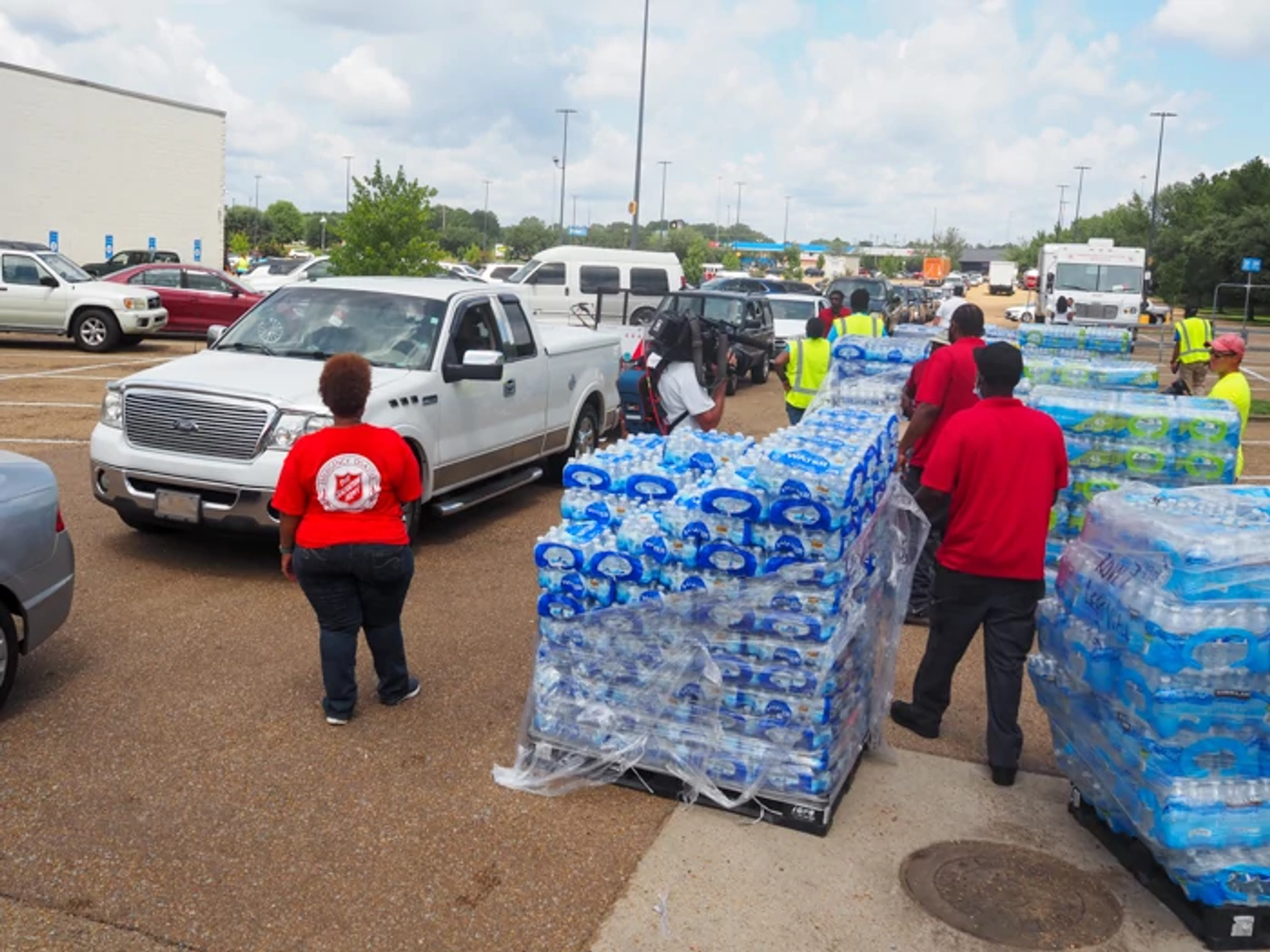 The Salvation Army’s Alabama-Louisiana-Mississippi Division put together a seven-person emergency response team, under the leadership of Incident Commander Major Bill Shafer, to work with local Salvationists and volunteers. Response teams were also dispatched from Tupelo and Hattiesburg, with their role mainly to transport water to underserved communities and take supplies  to people unable to get to the city’s distribution points.

The Salvation Army’s first action was to distribute two truckloads of bottled water in a drive-through event in a Walmart parking lot.

Octavia Mallard, whose house had no water pressure, told the Salvation Army responders: ‘I’ve been everywhere trying to get water. This is such a help. We don’t know when we will have access to water again. This is life-saving.’

Salvation Army teams have continued to provide help to those who were in the greatest need.

The Jackson Institute for the Blind was provided with water by the team from Tupelo and 48 cases of water were distributed to a dialysis centre that had not been able to access water from city authorities. A partnership with the Lowes home improvement chain enabled the team from Hattiesburg to take water to outlying areas that were far from the official city distribution points, and contacts made with the local fire departments and other first responders opened up effective channels for knowing the places of greatest need. 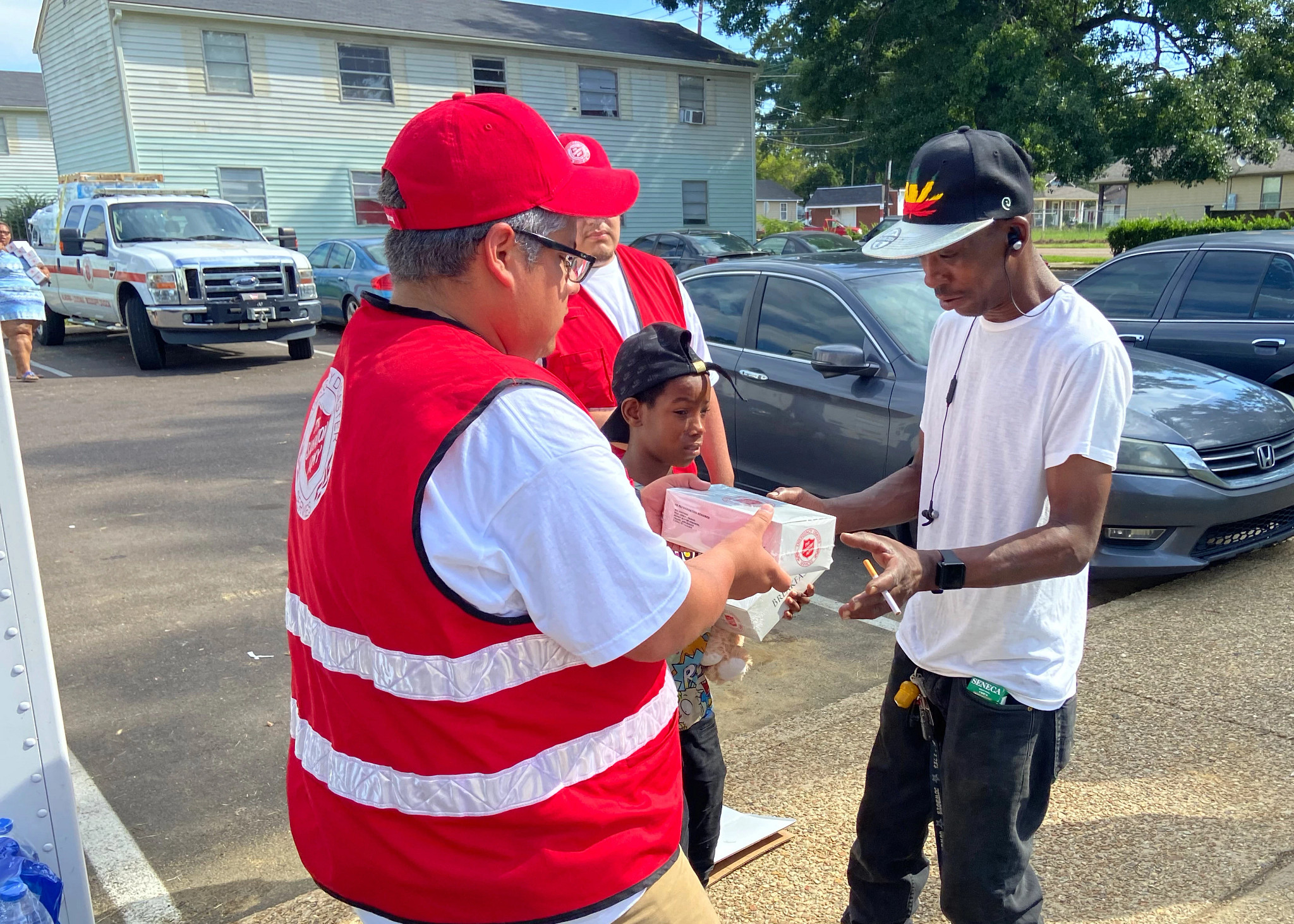 There were many stories about how grateful and relieved people were to receive help. Lieutenant Victor Estudiante recalled that he and his brother were about to leave one neighbourhood which seemed to have been abandoned by its residents.

He said: ‘I remembered a [Bible] verse about casting your nets on the other side of the boat (John 21:6) so we turned around and drove back down the street. An elderly lady flagged us down and asked if we had water.

‘After we told her we did, she grabbed her cellphone and told the person on the other end, “The Salvation Army is here, tell everybody!” Within minutes the street was full of residents getting water and thanking the team for not forgetting them.’

Another significant partnership – with PepsiCo, the PepsiCo Foundation and Brown Bottling Group – enabled The Salvation Army to organise a large-scale distribution on Labor Day (a public holiday on the first Monday in September) at McLeod Elementary School. Volunteers from PepsiCo and Brown Bottling served alongside Salvation Army staff and volunteers to distribute 14,000 meals, 15,000 cases of bottled water and hygiene items.

Will Trueblood, The Salvation Army’s Director of Emergency Disaster Services for Alabama, Louisiana and Mississippi, said: ‘These families are resource-limited, have little access to support, and are physically and emotionally drained by the stress of this ongoing crisis. They need help, they need hope, and The Salvation Army is committed to providing both.’

The situation in Jackson has now improved significantly, although tap water must be boiled to ensure it is safe to drink. Throughout its response, The Salvation Army has given out 14,417 cases of water, 15,130 meals, 480 boxes of cleaning supplies, 2,600 hygiene kits and 10,368 pairs of socks.

The emergency teams have returned to their bases, but The Salvation Army in Jackson remains available to all who need help.

From emergency reports published by the USA Southern Territory