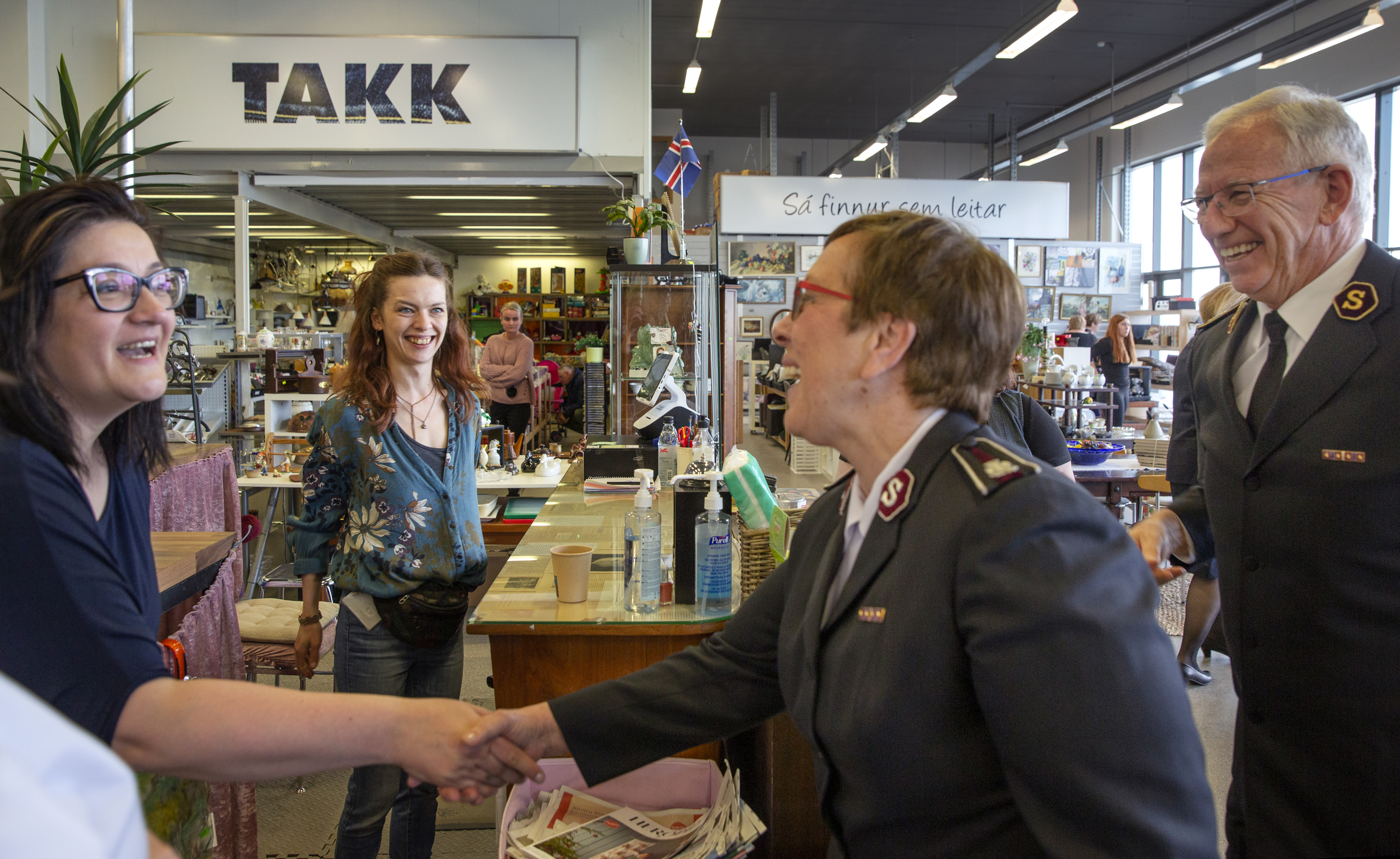 A NINE-DAY journey by General Brian Peddle and Commissioner Rosalie Peddle (World President of Women’s Ministries) across the three countries of The Salvation Army’s Norway, Iceland and the Færoes Territory began in the Icelandic capital Reykjavik on 28 May 2022. During their time in the territory the international leaders met with Salvationists, employees, volunteers and friends of The Salvation Army, treating everyone with great warmth and clearly gaining inspiration from seeing how God is at work.

Icelandic president Guðni Th. Jóhannesson welcomed the General, accompanied by district officer Captain Hjördís Kristinsdóttir, to his official residence, Bessastaðir. The General later posted on his Twitter account that the president ‘spoke words of appreciation for the contribution that The Salvation Army brings to this nation’.

The international leaders later met volunteers, employees and customers at the Hertex shop, which sells pre-owned items and is a substantial source of income for The Salvation Army in Iceland.

The following day, the General had the privilege of enrolling 31 senior soldiers in the new hall of Reykjavik Corps (church). Since its opening during the COVID-19 pandemic, the corps has become a hub for the community and almost a second home to schoolchildren who attend a homework club every Tuesday and Thursday and are welcomed to ‘Open House’ every Wednesday.

The corps fellowship has a distinctly multinational feel, which was reflected by the new soldiers who come from six countries – Iceland, El Salvador, Peru, Colombia, Venezuela and Ecuador. The service, led by Territorial Commander Commissioner Knud David Welander, was translated from English into Icelandic and Spanish. 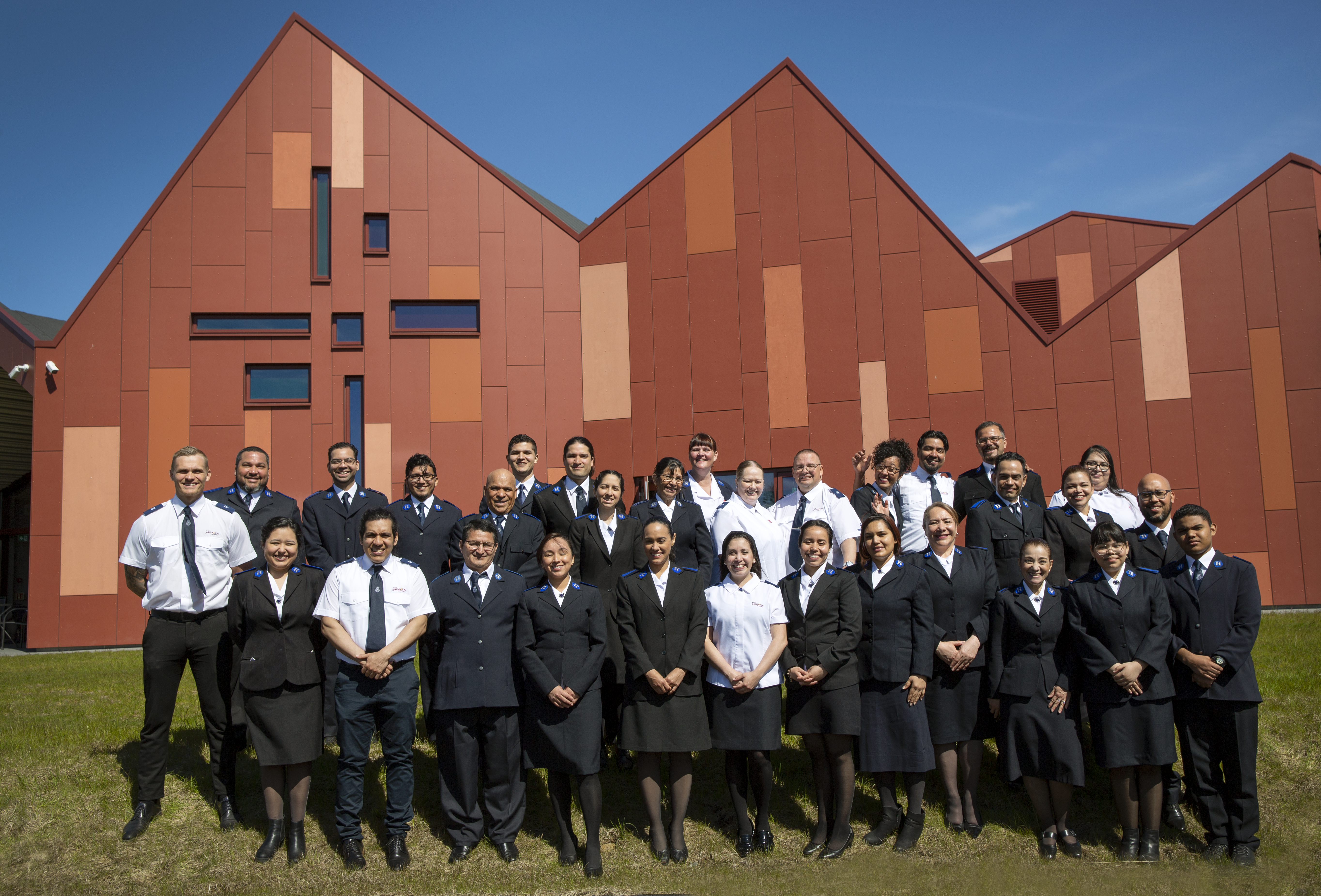 Victor Sequada, a new soldier who is originally from Venezuela, told the congregation: ‘Since we arrived in Iceland we have found peace and security in our daily lives that we‘d never experienced before. And although our future is still uncertain, we know we have found a family in The Salvation Army … I want to be a soldier of The Salvation Army, to be able to guide people and help them in their needs.’

In the Færoe Islands, the international leaders experienced the grandeur of nature, the warmth of the people and the Jesus-focused Salvation Army ministry. At Herbergið (‘The Shelter’), a rehabilitation centre in the capital, Tórshavn, the General and Commissioner Rosalie met with residents and staff.

Afterwards, the visitors headed to Eiði, a former Viking settlement in the far north of the islands. Today this village of 400 people is home to a Salvation Army rehabilitation centre for young adults – the only one in the country. Prior to its opening, at-risk young people in the Færoes were sent to Denmark for treatment but now they can receive help in their own nation. The General’s spontaneous prayer of blessing over residents and staff made a strong impression on everyone present.

A Spirit-filled occasion took place when the international leaders, territorial leadership and a group of singers and musicians from Tórshavn Corps shared a meal on a historic farm in Kirkjubøur. Inhabited by the the Patursson family since 1557, and hosting the coastal ruins of 14th-century St Magnus Cathedral, the farm has been a spiritual hub for centuries. It was the perfect location for the General’s social media devotional message, and for the singers from Tórshavn to proclaim in Færoese: ‘How Great Thou Art’.

Standing near the ocean, the General told his Facebook followers: ‘This is an amazing place. Here you will find a group of dedicated, faithful Salvationists who love the Lord and are getting on with mission. They are such an inspiration and it’s a joy to be here with them.’ Norway was the final destination for this visit. There, the international leaders witnessed a broad range of social programmes and led a meeting in Stavanger before moving on to the capital, Oslo, to lead Pentecost Sunday worship that included Spirit-filled moments of prayer, music and worship. The General reflected: ‘These are the Pentecost Sunday mornings that you hope not to forget.’

Preaching on the work of the Holy Spirit from the original Pentecost through to today, the General challenged the congregation to have ‘a personal experience and engagement with the Holy Spirit’.

Public worship meetings from Tórshavn, Stavanger and Oslo were streamed online and watched by people from across the territory. Social media pages overflowed with comments of gratitude to God because of what had been shared and experienced.

Based on a report by Geir Smith-Solevåg