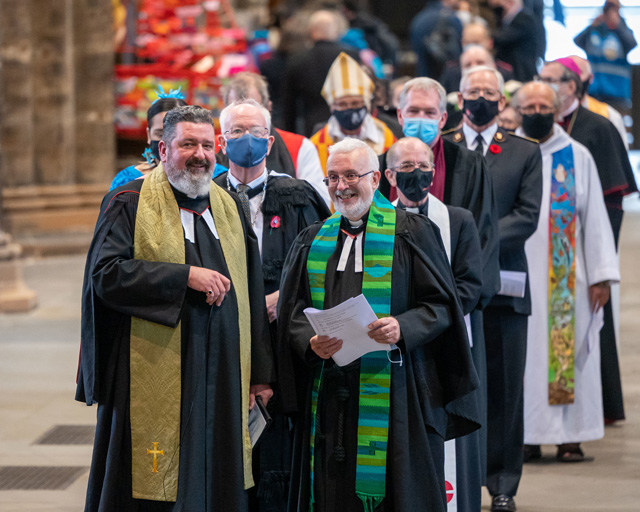 GENERAL Brian Peddle and Commissioner Rosalie Peddle (World President of Women’s Ministries) joined representatives of Christian churches and organisations from around the world at a special ecumenical service in Glasgow Cathedral, UK, that was also attended by United Kingdom and Ireland territorial leaders Commissioners Anthony and Gillian Cotterill. The event was organised by Glasgow Churches Together and took place less than three miles from where the COP26 United Nations Climate Change Conference was taking place. The service was attended by guests from countries including Australia, Fiji and Zimbabwe in a show of ecumenical solidarity for global climate justice.

The General said: ‘Notable and special moments occur when ecumenical colleagues stand together on an issue of mutual concern and do so on behalf of our faith communities. It was a privilege to include the voice and presence of the international Salvation Army in light of the global implications for the planet. We are stronger together.’

Some of those who took part were from nations which are already bearing the brunt of climate change. Revd Dr Martin Johnstone, who is the COP26 Ambassador for Glasgow Churches Together, said after the event: ‘It has been inspiring over the past week to meet and learn from passionate young people committed to climate justice, and to spend time listening to the wisdom of people from some of the nations most impacted by climate change … It was wonderful to have many of them at Sunday’s service.’

Church leaders from Scotland were asked to invite young climate activists as guests, and The Salvation Army was represented by five young Salvationists from the East and West Scotland Divisions. Representatives from the Young Christian Climate Network (YCCN), a group which has completed a 1,200-mile relay to Glasgow, were also in the congregation.

Piper Willie Park opened the service by leading a procession into the 12th-century building, and later members of the clergy walked to the tomb of St Mungo, the patron saint of Glasgow, who was buried at the site in the 7th century. 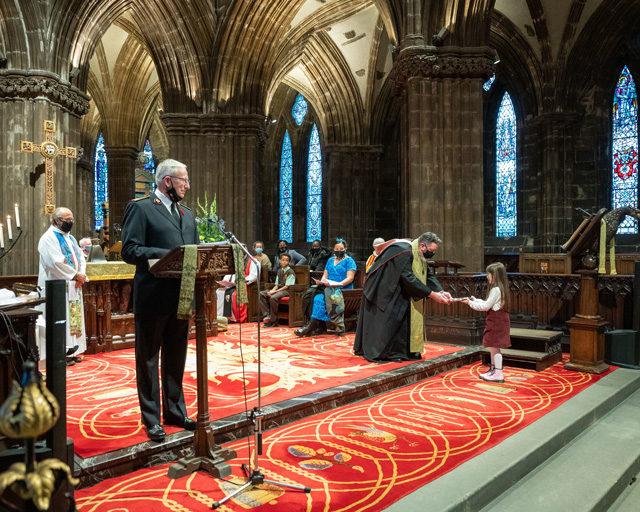 'Symbolic act' by the General

The General took part in a ‘symbolic act’, sharing words that were a reminder of the various ‘gifts of God’, while children brought the gifts – including the Bible and food and drink – to be placed on the altar.

The sermon was delivered by Revd Dr Susan Henry-Crowe, General Secretary of the General Board of Church and Society of the United Methodist Church, who used Psalm 23 – ‘The Lord is My Shepherd’ – as her text.

As part of her reflection, Dr Henry-Crowe drew on the three art installations which are on display in the cathedral: Returning and Into your Arms by James Pfaff; I will Sit with You and I will Learn to Listen by Gardner and Gardner; and A Lament in Black Paint by I.D. Campbell.

Dr Henry-Crowe said: ‘For those of us who are claimed by faith … Our stories of faith acknowledge the stories of God’s goodness in creating our world. We know the stories of how it began and how exquisite it was. And we have a special responsibility to listen to those living closest to the earth and seas – indigenous communities, animals, birds, fish.

‘We begin to hear a way forward. Return the seas to a clean home for its inhabitants. Do not pollute the waters. Return the habitation of your communities to clean and healthy spaces. Do not ruin communities for your greedy purposes.

Additional contributions were given by Bishop Bill Nolan from the Catholic Church in Scotland and Most Revd Mark Strange, Primus of the Scottish Episcopal Church. Lord Wallace, the Moderator of the General Assembly of the Church of Scotland, gave a Bible reading.

The General remarked: ‘I had a sense that, as we stood with each other and with faith leaders from nations beyond our borders, we welcomed into our ecumenical faith participants from the world. There was a sense of joint concern as we worshipped, prayed and articulated mutual concern for our world.’

All images shown are the copyright of John Young

Adapted from a release by the Church of Scotland