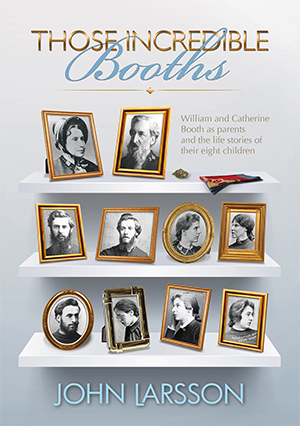 Lift a large stone that has rested in the ground for years, and you are almost certain to find signs of life, something that moves, providing a fascinating and intriguing glimpse into a hidden world.

In his book Those Incredible Booths, General John Larsson (Rtd) has masterfully turned an historical stone which, though not lying totally undisturbed, has rarely yielded so much of such interest all at the same time.

John Larsson’s gripping 'hard to put the book down' style of writing is legendary. He does not disappoint with Those Incredible Booths. With art and skill, and some very well chosen archive photographs, he turns the stone of a century and a half to reveal the light and shade of the family that God used to birth, shape, nurture and energise The Salvation Army.

William and Catherine Booth and their eight children were one of the outstanding families of their generation. In this book, John Larsson gives absorbing insights into the godliness, religious fervour and spiritual development of this amazing Victorian family. After describing William and Catherine as parents, he devotes a chapter to each of their eight children: Bramwell the born organiser, the talented and attractive Ballington, the charismatic Kate who had the face of an angel, Emma, the more shy and reserved daughter, Herbert the gifted lyricist and musician, Marian so sadly disabled, the flamboyant, strong-willed Eva who would figure so prominently in the crises of 1929 and become the Army’s fourth General, and Lucy who faced the loss of so many loves throughout her life.

Having turned the stone, the author skilfully and sensitively disturbs the ground so that the everyday human side of the Booth family is revealed and released from a cloak of secrecy. We are given glimpses into the strict discipline of daily life in the Booth household, the education of the children, their antics and their developmental challenges. We learn of their natural and spiritual gifts and how these gifts enabled such notable achievements. We are given insights into the cast-iron will that ran through the family, and the resulting acrimony that at times painfully cut though the bond of family relationships. And we are granted access to some of their disappointments, sorrows, personal pain and frustrations as well.

There are some fascinating glimpses into how, for some members of the family, romance and love developed from a spark into a flame. We also become privy to some deeply personal and tender moments of human devotion.

The interest of readers will be captivated by some intriguing asides, like William Booth’s stance on smoking, his love of animals and the way he would sing while dressing. We learn how the young family would spend Christmas, about Bramwell feeling certain that he was not destined to be a leader, about Herbert becoming a pioneer in the film industry, and Eva making an entrance into a meeting through a window. Readers are also introduced to Harry, and there is a not-to-be-missed endnote about Georgie, both accepted by the family as sons.

The life stories of the children have a worldwide dimension, and we see them pioneering or leading the Army in places as diverse as continental Europe, the USA, Canada, Australia, India and South America.

Many books have been written about the Booths, most of them focusing on one individual member of the family. But this book is different. Held within its covers is a finely crafted image of the whole family in one place.

Those Incredible Booths makes no attempt to hide us from the realities of Booth family life. Like any family it had its ups and downs, its tension and trauma. But what John Larsson does in such a compelling and readable way is to reveal the truly outstanding qualities of mind and heart of every member of the family, leaving us to reflect in wonderment and amazement at their collective genius. Their deep, passionate love for God and commitment to the mission of Christ, coupled with their determination to do whatever they believed God was leading them to do, made them remarkable in their time. The Booths really were incredible. And as time will surely prove, indelible too!