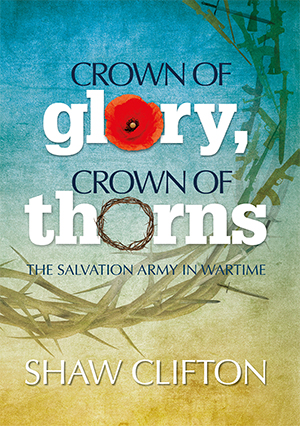 I read Crown of Glory, Crown of Thorns – The Salvation Army in Wartime immediately after returning from participating in the centennial commemoration of the death of my great-uncle George, in Flanders, during the First World War. With the help of an ingeniously designed museum in Ypres, Belgium, not only the scenes but also the sounds and smells of battle had left an indelible impression on me, giving this book an even greater poignancy and personal relevance than I might have anticipated. This fresh understanding of the realities of war added weight to the rightness of the dedication of this work to Salvationists who served in three wars between 1899 and 1945, as well as those who did not enter combat on the grounds of conscience.

Based on his 1988 doctoral thesis, General Shaw Clifton (Rtd) provides us with the only comprehensive analysis ever compiled of The Salvation Army in wartime. As the author discovered, it was not possible to ‘simply read off Salvationist attitudes to war from official Army statements in wartime’, as records such as these do not exist. Instead, and thanks to the writer and his painstaking and meticulous research, we are now able to analyse the three main principles which governed Salvationist war reactions between 1899 and 1945: the spiritual priority of Christian evangelism and soul-saving, the practical priority of compassionate good works, and the upholding of Christian internationalism.

Any sense that a PhD thesis is not material for the ordinary reader is quickly dispelled. In a literate and engaging manner General Clifton takes us on a journey through the dark days of three wars. With leaders (the Founder, General Bramwell Booth and General George Carpenter) seeking to ensure that the Army both served humanity and spoke with a voice showing favour to no one side, the tension between political neutrality and the demands of patriotism placed them and the movement under great strain. So acute is the writer’s sense of the burden carried by the three Generals, it is easy to forget that this body of work was written some 18 years before he was elected to the highest office in The Salvation Army.

Not only is this an invaluable addition to the annals of Salvation Army history and a work of substantial scholarship, but it is thoroughly readable, stimulating and challenging. History, biography and theology combine to explore periods in the life of the Army until now barely explored beyond stories of the ‘doughnut girls’ and Red Shield clubs. Instead we discover directives from International Headquarters for prayers that ‘a revulsion against war’ would be created in the hearts of all. Also revealed are the serious tensions arising from disparate views among the senior leadership of the Army around the world: tensions not surprising when pacifist principles and the concept of ‘just war’ collide.

When the world is at war and narrow nationalism and xenophobia are rampant, the gift of internationalism is hard to embrace. This book is the story of the survival of this gift and reveals the care with which it must be handled.